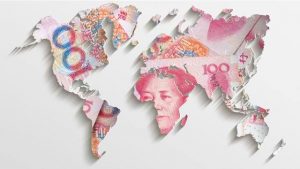 According to Fan, this will be achieved through stable economic growth while maintaining financial stability in a long-term process wherein market forces will play a “decisive role.”

It must be recalled that China previously imposed some curbs on capital outflows affecting the pace of the yuan internationalization. However, reduced pressure from outflows has helped steady the yuan. It has also brought China’s foreign currency reserves back over the closely watched $3 trillion mark.

The Fitch Credit Rating Agency said last May of this year that moves to control capital flows as well as concerns over potential further depreciation of the yuan are likely to delay the internationalization of the Chinese currency.

“Policies to contain capital outflows and ongoing concerns over currency depreciation are likely to hold back internationalization in the short-term,” Fitch Ratings said in a report.

Progress toward the internationalization of the Chinese currency has lost momentum in the last two years following Beijing’s announcement of a string of measures to tighten controls on money moving out of the country, including close scrutiny of outbound investments, individual foreign exchange purchases and large overseas money transfers.

The proportion of international currency payments denominated in yuan fell to 1.8 percent in March 2017 from 2 percent a year earlier. Meanwhile, the share of external holdings of Chinese government bonds during the same period increased to 3.9 percent from 3 percent.

In 2009, yuan settlements were close to zero. It was during this time that internationalization was seen as a way for firms to reduce currency risks and challenge the US dollar’s role as the world’s major reserve currency.

Fitch believes that the yuan can also be used as a reserve currency in the long term because of its global importance and inter-connectedness. However, data from the International Monetary Fund in March of this year showed that the Chinese yuan totaled just over 1 percent (or $84.51 billion) of the total allocated currency reserves.

The Chinese yuan has stabilized this year following curbs on capital outflows and a reversal of the dollar rally due to the fall of 6.5 percent in 2016.

China currency stands against the US dollar with stable market expectations two years after the China reformed its central parity system to allow the market to play a bigger role in the exchange rate formation.

The central parity rate of the Chinese yuan strengthened by 128 basis points to 6.6642 against the US dollar as of today, August 11. This is noted to be the highest level in more than ten months.

According to China Foreign Exchange Trade System, the adjustment came after a rise of 305 basis points Thursday and a rise of 109 basis points Wednesday.

The advance came despite a rebound of the US dollar index, which indicates a change in market expectations.

The U.S. dollar index, a measure of the value of the dollar against a basket of foreign currencies, has dropped nearly 10 percent since the beginning of this year, contributing to a relative rise of the Chinese currency. However, even the recent pick-up of the index didn’t deter the continuous advance of the yuan.

The yuan is also supported by economic data, with restructuring providing fresh signs of stabilization for the economy. China’s economy expanded 6.9 percent during H1, with consumption and services, together with new innovation-driven economic sectors, playing bigger roles in the economy.

It is the first time since June 2014 that reserves have expanded for six straight months.