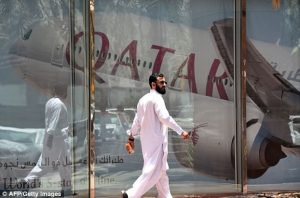 There’s a diplomatic chaos in the Middle East.

Last week, Qatar has been reportedly isolated by most of its neighboring countries because of a growing dispute over Qatar’s support of the Muslim Brotherhood and accusations that Qatar backs the agenda of Iran. Saudi Arabia led the coalition of Arab nations in one of the worst rifts among some of the Arab world’s most powerful states.

Saudi Arabia and Bahrain are the first countries to cut ties with Qatar, followed by Egypt, Yemen, Libya, and the United Arab Emirates. Kuwait and Oman are the only members of the Gulf Cooperation Council that remains to have ties with Qatar.

Almost immediately after the decision, the three Gulf states announced that Qatari tourists and residents will only have two weeks to leave. Transport links to Qatar were also shut off. Qatar was also expelled from the Saudi-led military coalition fighting in Yemen even though it shares borders with Saudi, the UAE and Bahrain.

The decision to cut ties with Qatar will result in an economic crisis that includes complete land and total blockade.

Etihad, Emirates and budget carrier FlyDubai have already announced that they are suspending flights to and from Qatar indefinitely.

According to the Saudi state news agency, SPA, ‘Qatar embraces multiple terrorist and sectarian groups aimed at disturbing stability in the region, including the Muslim Brotherhood, Isis and al Qaeda, and promotes the message and schemes of these groups through their media constantly.’

However, Qatari foreign ministry responded that they are facing a campaign of lies and fabrications aimed at putting the country under guardianship.

“Qatar is committed to its charter as member of the Gulf Cooperation Council. It respects the sovereignty of other states and did not interfere in their affairs,” says the Qatari foreign ministry.

A senior Iranian official said that cutting ties by Arab nations will not help end the crisis in the Middle East.

“The era of cutting diplomatic ties and closing borders … is not a way to resolve crisis … As I said before, aggression and occupation will have no result but instability,” says Hamid Aboutalebi, deputy chief of staff of Iran’s President Hassan Rouhani, in a tweet.

US Secretary of State Rex Tillerson said on Monday, “We certainly would encourage the parties to sit down together and address these differences.”

It Started with a Hack 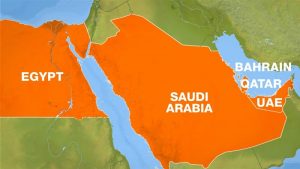 The dispute is said to have escalated after a recent hack of Qatar’s state-run news agency, Al Jazeera. Comments falsely attributed to Qatar’s emir were broadcast in Qatar, wherein the country’s leader expressed support for Iran, Hamas, Hezbollah and Israel while suggesting that US President Donald Trump may lose power. Qatari government has since denied the comments.

The increasing unrest began when US President Donald Trump visited Saudi Arabi, and then subsequently to Israel, which is the Kingdom’s regional enemy. There are speculations that these visits turbocharged the displeasure of Qatari royals.

The on 27 May, Qatar’s ruling emir Tamim bin Hamad Al Thani congratulated Iranian president Hasan Rouhani on his re-election. The move was treated as a public rebuttal of Saudi Arabia’s efforts to fight against the Shiite-ruled nation, which the Sunni KSA treats as its main enemy and a threat to regional stability.