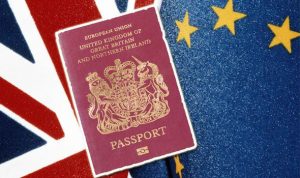 The number of Britons applying for German citizenship have increased by 361% in 2016 following the EU referendum. The German Federal Statistics Office reports that 2,865 Britons have decided to jump fence because of fears that Brexit will make it harder to travel and work within the European Union.

“This is the highest ever level of registered British citizens,” the office said.

16,290 Turkey nationals, on the other hand, are also applying for German citizenship despite the failing diplomatic relations between the two countries.

Italy, Sweden, Hungary and Poland also reported a surge in interest of Britons applying for foreign passports immediately after the Brexit vote.

Ireland’s foreign ministry also reported the same trend, with passport applications from the UK jumping to 41%, which translates to 65,000 applications filed. 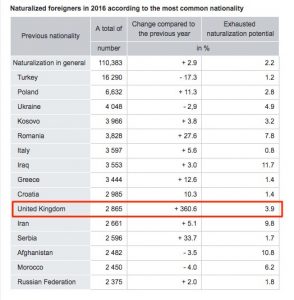 The German Federal Statistics Office believes that the increase of naturalised German citizens who were previously UK citizens definitely has something to do with the Brexit.

A sharp dip in the EU’s popularity was reversed after Britain voted to leave the coalition in June 2016. This is according to a survey conducted by the Pew Research Center of about 10,000 citizens across the 10 EU countries.

The UK also appears to be becoming less attractive for other Europeans. In 2016, 117,000 citizens of other EU countries left Britain, which shows an increase of 36% from 2015. Reports show that EU migrants are leaving because of uncertainty over their legal status, high price of goods and slower economic growth.

The value of the pound is down by 15% since the referendum while salaries have stagnated, making the UK’s worth less when transferred abroad.

Who is Eligible for German Citizenship? 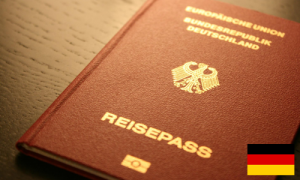 Foreigners are eligible to be naturalized as German citizens if they have lived in the country for eight years minimum, or are married to a German citizen. Adequate knowledge of the German language is required, along with the payment of an application fee of €250.

Also eligible are those who can prove that their ancestors have been expelled from Germany or murdered by the Nazis during World War 2. If proven, these applicants are exempted from the test.

Regardless of their origins, new citizens are 33 years old (on average). However, it is unusual for EU citizens to apply for German citizenship. Before the Brexit, only 1.6% of all applicants for citizenship come from the EU. After the Brexit, 3.9% of UK citizens are granted citizenship, along with Romania and Bulgaria.

Britons are allowed to maintain their dual citizenship, as long as they are granted German citizenship while Britain is still a member of the EU. Britons have until 2019 to get their foreign citizenship approved, before the “divorce” gets finalized.